Spring has sprung. Now is the time to open the doors to the local ice cream shoppe. Here is the scoop. The selling potential of one our our ice cream neon signs will have every sweet tooth in town knocking at your window. 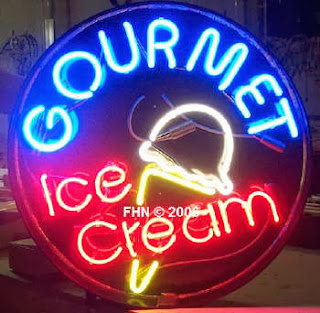 Business is tough and it can be a rocky road when your business is only operational part of the year. But our ice cream neon signs are the cherry to top off your advertising campaign. They are very affordable, extremely effective and work for you 24/7 without complaint. Whether your customer prefers plain old vanilla ice cream or death by chocolate topped with whipped cream and sprinkles, a neon sign will help bring in the cold hard cash every business owner is looking for.
Posted by Fire House Neon at 1:08 PM No comments:

When one thinks of a neon sign, what usually comes to mind is a splashy neon business sign used to attract attention. One often forgets that neon is an art form and a dying one at that. The Museum of Neon Art (MONA) is here to remind us of the spectular effects that can and have been achieved with neon glass art. MONA presents a bit of everything from classic restored neon signs to new age light shows. The museum is relocating to Glendale CA and a new building, where it will be the corner stone of the new Cultural Arts District. The museum is dedicated to keeping the art of neon alive and offers neon classes and well as neon tours in the LA area. You Glow MONA!

It will soon be March 17th, also know as St. Patrick's Day to the Irish. Saint Patrick, who live during the first century is the patron saint of Ireland. Born in Roman Britian, he was kidnapped at the age of 16 and taken to Ireland as a slave. He later escaped, but returned to Ireland and is credited with bringing Christianity to it's people. 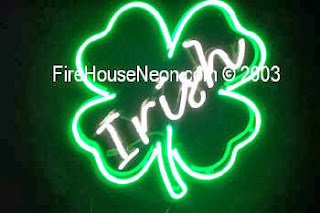 The symbolic shamrock has long been associated with St. Patrick. Legend has it that he compared the clovers leaves to the Holy Trinity: Father, Son and Holy Ghost. Occassionally shamrocks are found with four leaves. These are rare and considered to be lucky for the finder.
In America, St. Patrick's day is celebrated with parades, shamrocks and all things Irish. From leprechauns to the color green and cabbage to the Blarney stone, you don't have to be Irish to celebrate this holiday. Slip on some green apparel and decorate your table with some green food and drinks. Hang green and orange balloons from the ceiling. Set out a four leaf clover neon sign to add some luck of the Irish. Play Irish Songs or put in a DVD of Riverdance. Decorate with posters and banners featuring pictures of Ireland. Soon you will have a new tradition to celebrate each year.
Posted by Fire House Neon at 3:35 PM No comments: